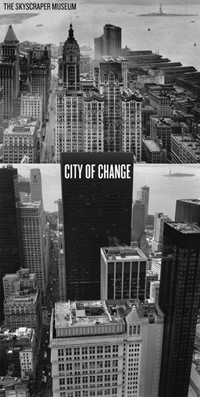 CITY OF CHANGE explores the role of the skyscraper in shaping the identity and character of downtown's streets and skyline. It brings together a wide range of historic construction photographs, maps, film clips, real estate records, and urban views of lower Manhattan, as well as documentary work by contemporary photographers. Linking past, present, and future, the exhibit examines the construction of the World Trade Center and the rebuilding at Ground Zero and highlights the new construction and residential conversions underway throughout the district.

Top image: A 1914 real-photo postcard view down Broadway to the harbor from the observation deck of the Woolworth Building. At the center are the Singer Tower and City Investing Company Building. The full block of the Equitable Building, which after 1915 would obscure the towers of Wall Street, is a cleared site awaiting construction.

Bottom: A 2004 photograph shot from the same position shows the canyon of Broadway lined with modernist slabs of glass and steel and dominated by 1 Liberty Plaza, which replaced the older towers. (c) Holly Hinman 2004

The Skyscraper Museum's exhibitions and programs are supported in part by public funds from the New York State Council on the Arts, a State agency.

The Museum gratefully acknowledges the generous support of
© JPMorgan Chase. 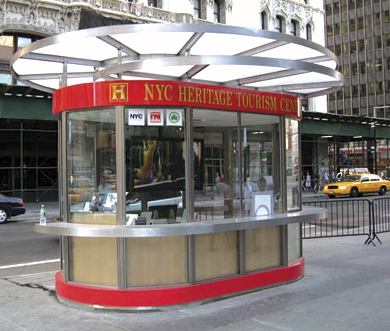 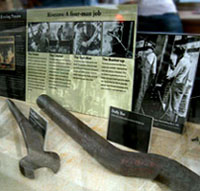 Currently on display at the NYC Heritage Tourism Center are riveting tools from The Skyscraper Museum on loan from third generation ironworker Steve Havemann. Descriptions of the tools stand alongside images depicting the process of riveting from the construction of the Empire State Building. The new kiosk replaces the tourism information kiosk at the southwestern tip of historic City Hall Park on Broadway between Vesey and Barclay Streets, established after 9/11 in response to the growing number of visitors to Lower Manhattan. The kiosk is open seven days a week from 9 a.m. to 6 p.m, Monday through Friday and 10 a.m. to 6 p.m. on weekends.