This is the first exhibition in the FUTURE CITY 20|21 cycle.

CLICK HERE for a virtual walkthrough of the exhibition.

New York Modern was the first in a cycle of three related exhibitions, spanning a year, entitled FUTURE CITY: 20 | 21 that juxtaposed a retrospective of American visions of the skyscraper city of the future from the early 20th century with an exploration of Chinese cities today, pursuing the parallel conditions of rapid modernization and urbanization. The second exhibition of the cycle focused on Hong Kong and New York, and the third, “China Prophecy,” explored the 21st-century skyscraper city of Shanghai. 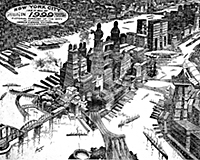 New York Modern, which opened on October 24 and ran through Spring 2008, looked back at prophecies of the skyscraper city in the early 20th century when the first dreams of a fantastic vertical metropolis took shape. From the invention of the tall office building and high-rise hotels in the late 19th century, New York began to expand upward, and by 1900, the idea of unbridled growth and inevitably increasing congestion was lampooned in cartoons in the popular press and critiqued by prominent architects and urban reformers. 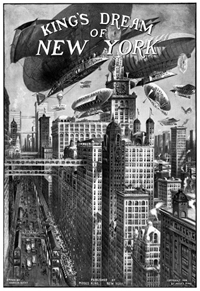 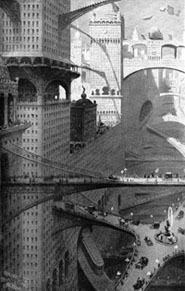 In the 1920s, though, a new vision of the future swept American culture–a monumental city of towers, multilevel highways, aerial transport, and densely developed commercial districts. Principally the projections of New York architects and planners, this new type of hyper-concentrated urbanism was set forth in dazzling images, not only in professional circles and publications, but in newspapers, books, magazines, art galleries, department stores, and movies.

The inspiration and motivation for these prophecies was the city itself–its soaring buildings, teeming streets, and hurtling subways. In 1925, New York passed London to become the world’s largest metropolis. With a population of nearly six million in the city proper, ten million in the region, New York continued to grow in all directions, but especially in Manhattan where the crowding business districts and lightning pace of the skyscraper boom seemed to promise that every block would soon be built anew. Rockefeller Center, the three-block complex of harmonized buildings, roof gardens, pedestrian zones, and richly mixed uses demonstrated a model for an architect-orchestrated urbanism. 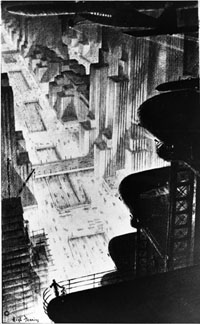 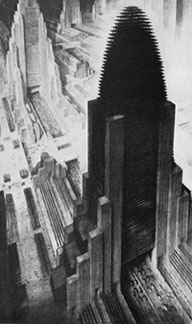 New York Modern explored the idea of the skyscraper city of the future in the context of the period’s phenomenal urban expansion, pressing problems of congestion and overbuilding, and new tools for planning and control, such as setback zoning. Three key personalities shaped the debate in architectural circles–Raymond Hood, Harvey Wiley Corbett, and Hugh Ferriss–and offered alternative models for a future city of towers. 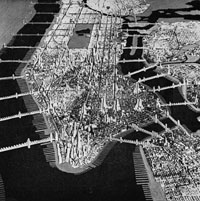 Raymond Hood, "Proposal for Manhattan 1950," Montage of Aerial Photograph and Drawing, 1929.
The exhibition includes drawings and publications by Hood promoting his ideas for skyscraper bridges that would span New York’s rivers and create new communities on the water and for a favorite proposal to ease traffic congestion by demolishing portions of low-rise midtown blocks, replacing them with taller and more slender towers. 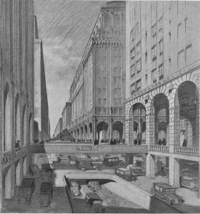 Corbett's concept for separation of vehicular and pedestrian traffic with arcaded sidewalks, RPNY, 1923-24.
By contrast, Harvey Wiley Corbett argued for dense multilevel traffic and transit solutions that separated levels of rail, wheeled vehicles, and pedestrians and with upper-level domains of gracious sun-lit plazas and sheltering loggias. Like many contemporaries, Corbett imagined that airplanes and other forms of aviation could land on platforms or building tops in the central city. 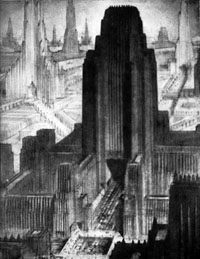 Hugh Ferriss, "Looking West from the Business Center," The Metropolis of Tomorrow, 1929.
Even more than the practicing architects Hood and Corbett, the delineator Hugh Ferriss became a dominant image maker of the urban future. The exhibition charts his influence, from his early, seminal drawings of the evolution of setback skyscrapers shaped by the 1916 zoning law and his collaborations with Corbett and Hood, to the summary of his theories in the famous 1929 volume The Metropolis of Tomorrow. Ferriss’s dramatic charcoal renderings of a city of vast multi-block megastructures, set at intervals in separate zones of Science, Art, and Business, were widely published in the late twenties and, more than any other source, defined the image of the possible urban future in American popular culture. Two direct influences can be seen in the drawings by the Mexican-born architect Francisco Mujica of “A Hundred-Story City in the Neo-American Style” and in the spectacular movie set for the 1930 Fox film “Just Imagine,” an early “talkie” billed as “the first science fiction musical.” Both are featured in the exhibition. 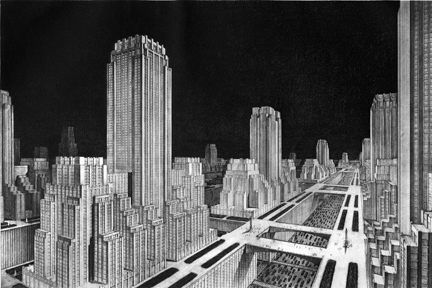 "100-Story City in the 'Neo-American Style'", Plate CXXIV from Francisco Mujica's 1929/30,
History of the Skyscraper. 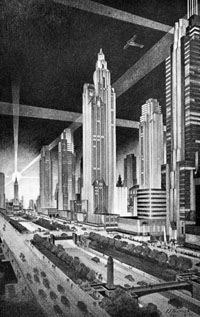 "The Proposed Chrystie-Forsyth Parkway," from The Regional Plan of New York and its Environs, 1930.
Less monumental and regimented, but still imbued with the ambitious urban optimism of the period are a range of drawings and proposals from the Regional Plan of New York and Its Environs (now better known as the Regional Plan Association).  The RPNY’s nearly decade-long, massive, multi-volume study of the metropolitan region, begun in 1922, was a rigorous effort by a large team of planners to analyze the city and region’s growth, project its future, and recommend a rational plan for better alternatives.  The drawings in the exhibition illustrate ideas for a linked row of skyscraper apartments for Hudson River waterfront (highly reminiscent of the current residential development of the West Side Rail Yards), a civic building towering behind City Hall, and the transformation of the tenement rows of the Lower East Side to an avenue of gleaming towers. 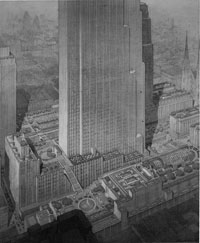 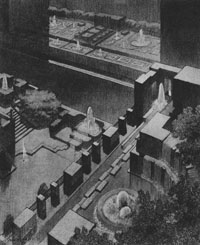 Proposed Roof Gardens, Rockefeller Center.
New York Modern also looks closely at Rockefeller Center as a materialization of visionary skyscraper urbanism (both Corbett, and Hood worked on the project). Covering three full blocks between avenues, replacing low-rise row houses with skyscrapers, pedestrian zones, and multiple levels of circulation, the midtown development demonstrated that the scale, aesthetic harmony, and mixed-use program envisioned for the future city was already possible. The installation focuses in particular on the roof gardens of Rockefeller Center where the architects proposed elaborate landscaping, colonnades, sculpture, and fountains. Hood promoted the scheme in a 1931 article in The New York Times Magazine entitled,“Hanging Gardens of New York,” claiming that in the future gardens would overspread the central business district, “utterly transforming the urban scene by spreading a magic carpet over so much ugliness.”

“From today’s perspective, these ‘past futures’ offer many interesting echoes in 21st century New York,” notes Museum director Carol Willis, who is also the exhibition’s curator. “Concerns about how to deal with traffic congestion, create mixed-use structures, preserve sunlight and nature in the densest of districts, and mitigate the pressure on Manhattan are the same now as they were in the twenties. Clearly, though, the idea that the future New York would be radically rebuilt and barely recognizable, thankfully, did not come to pass.” However, Willis notes, there was a fundamental insight in the visionary urbanism of the 1920s: skyscrapers would define the urban future, and New York, far more than any other place in the world, was the prophecy of the modern city.