THE RISE OF WALL STREET

You can view the installation virtually here.
Click here for information about past Rise of Wall Street events.

THE RISE OF WALL STREET charts the architectural evolution of one of the world's most famous locales.  "Wall Street" is a broad metaphor for the American center for global finance and a real place with an inordinately rich history layered into every lot of its nearly half-mile length, stretching from Trinity Church on Broadway to the East River.

From colonial times, when the first bastions were erected to mark the edge of town, Wall Street has been continuously transformed, both in function --from commercial and residential to financial --as well as in scale. Row houses were replaced by low-rise banks, then massive high-rise office buildings. The skyscrapers that line Wall Street today represent the climax species of an intense urban process that the exhibit documents with graphics of successive buildings on a given site since 1850. These "Vertical Wall Street" images dramatically illustrate the cycles of growth that shaped the financial district over time, charting both the evolution from small to tall and the growing girth of buildings enabled by new technologies and slow, but savvy site assembly.

Wall Street's high-rise history illustrates and exaggerates the typical story of skyscraper development expressed by the value of land and the demand for prime locations. As the district became the center of finance in the mid-19th century, Wall Street lots became the richest dirt on earth, selling at the highest prices per square foot ever recorded. The multiplicity of small lots and continuous occupation for more than 300 years also meant that Wall Street's big buildings represented the most expensive and challenging engineering and construction projects of their time. The exhibit explores how high stakes in architecture paralleled financial speculation at the heart of the capital of capitalism. 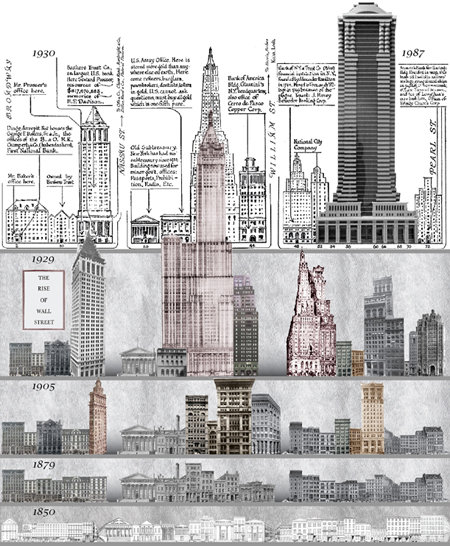 Vertical Wall Street, the graphic above, is composed of period panoramas and collaged images that picture every building on the north side of Wall Street from Broadway on the left (west) to Pearl Street on the right edge. In the image below, the direction is reversed, so the buildings that line the south side of the street start with Broadway at the far right and have Pearl Street at the left. The dated bands represent five eras, beginning with an 1850 drawing from New-York Pictorial Business Directory of  Wall-St., New York, published by C. Lowenstrom in 1849-1850 (courtesy of The New York Public Library).  The source of the 1879 band is Asher's New Pictorial Directory and Atlas of the City of New York, New York, published by J. R. Asher (courtesy of The New York Public Library). The 1929 band (above) incorporates a drawing of 40 Wall Street in the collection of The Avery Architectural & Fine Arts Library at Columbia University. The photograph of 70 Wall Street appears courtesy of The Office of Metropolitan History.  The 1930 band is taken from Fortune, March 1930.  All other images are from the collection of The Skyscraper Museum.  All rights reserved. 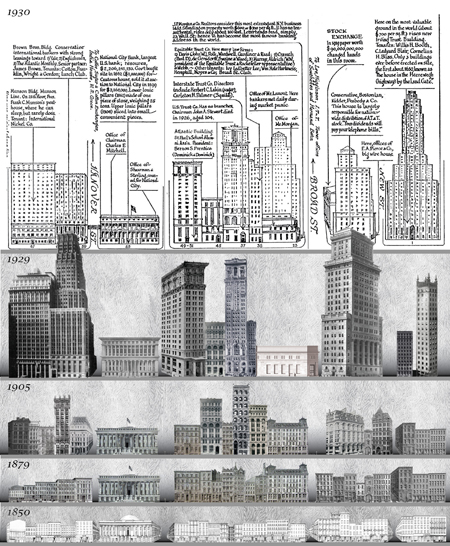 The Rise of Wall Street is presented with support from Deutsche Bank, a legacy institution of downtown New York's financial district, still located on Wall Street.

The Rise of Wall Street is supported, in part, by public funds from the New York City Department of Cultural Affairs.


The Rise of Wall Street is supported, in part, by public funds from the New York State Council on the Arts, a State Agency.