EXHIBITION OF THE ORIGINAL WORLD TRADE CENTER MODEL
The original Yamasaki World Trade Center Model was on loan to The Skyscraper Museum through June, 2006.

The presentation of the model at The Skyscraper Museum was made possible with the support of the Museum Loan Network, the New York State Council on the Arts, a State agency, and the Port Authority of New York and New Jersey. 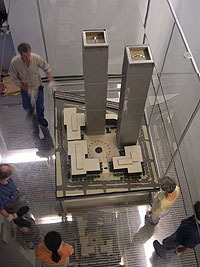 Just six blocks south of Ground Zero, the new home of The Skyscraper Museum at 39 Battery Place in Battery Park City opened an exhibition on the World Trade Center that featured the original model created for the Port Authority of New York and New Jersey by the architect Minoru Yamasaki. Built from 1968-1971 at a scale of 1:200, the monumental model has twin towers that are nearly 7 feet tall and shows the plaza and surrounding buildings and streets in minute detail, populated with tiny pedestrians, automobiles, and landscaping. 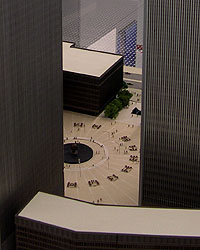 The only surviving representation of the World Trade Center at this scale, the Yamasaki model was on loan to The Skyscraper Museum from The Octagon, the Museum of the American Architectural Foundation in Washington, D.C. Recently conserved by a team of curators and restorers, the historic model is one of the finest examples of the art of architectural "miniatures" of its daythough in this case, the scale model is the size of a small room. 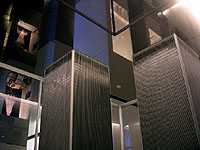 The Yamasaki model was surrounded by selections from the Museum's large collection of photographs of the construction of the WTC, spanning 1966-1974, and by other historic artifacts on the design, engineering, and marketing of the complex. Highlights included an 18-minute film "Building the World Trade Center" made by the Port Authority in 1983 from original footage. A second video on the conservation of the Yamasaki model was also on view. The exhibition also featured models and a rendering of the Freedom Tower which had its official ground breaking ceremony on July 4th. 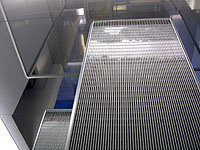 The conservation of the WTC model was made possible by a generous grant from Save Americas Treasures, a federal challenge grant administered through the National Endowment for the Arts and the National Park Service, Department of Interior in partnership with General Services Administration Presidents Committee on the Arts and Humanities, and from Alcoa, through a grant to Save Americas Treasures at the National Trust for Historic Preservation, and from the Museum Loan Network. The model and an exhibition on the conservation was exhibited at The Octagon in fall 2003 through the generous support of Yamasaki Associates, Inc. and Otis Elevator Company.

The presentation of the model at The Skyscraper Museum has been made possible with the support of the Museum Loan Network, the New York State Council on the Arts, a State agency, and the Port Authority of New York and New Jersey.

All photos by Reynan Punzalan.