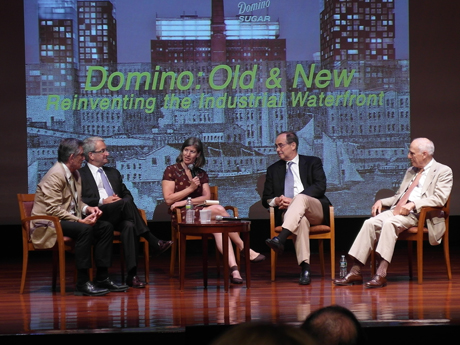 In the ongoing reinvention of Williamsburg's richly historic industrial waterfront into a burgeoning residential neighborhood, the massive Domino Sugar complex remains the greatest challenge and opportunity. With a site of 11.2 acres and a potential for 2200 residential units, including 30 percent of subsidized affordable housing, more than four acres of public open space, and the restoration and adaptive reuse of the landmarked refinery buildings, the Domino site is key to both the past and the future of this evolving neighborhood.

Carol Willis is the founder, director, and curator of The Skyscraper Museum. An architectural and urban historian, she has researched, taught, and written about the history of American city building. She is the author of Form Follows Finance: Skyscrapers and Skylines in New York and Chicago (Princeton Architectural Press, 1995), which received an AIA book award and was named "Best Book on North American Urbanism, 1995" by the Urban History Association. She has written introductions to several monographs and collections and has appeared in numerous television documentaries and radio broadcasts.

Ms. Willis is an Adjunct Associate Professor of Urban Studies at Columbia University where since 1989 she has taught in the program The Shape of Two Cities: New York and Paris in The Graduate School of Architecture, Planning and Preservation.
[watch it now]

For nearly forty years, Frederick A. Bland, FAIA, AICP, has directed downtown redevelopment plans and led the design of educational, cultural, and residential facilities in the U.S. and China. Mr. Bland is an active member of numerous civic boards in New York City, including the Brooklyn Botanic Garden and the James Marston Fitch Charitable Foundation. He has taught as an Adjunct Professor in New York University's Fine Arts Department for over 20 years, and has lectured on design at Yale University, Columbia University, Pratt Institute and City College. He was appointed a Commissioner of the New York Landmarks Preservation Commission in 2008.

As one of the city's foremost preservation architects, Mr. Bland helped restore such prominent landmarks as Grand Central Terminal, Rockefeller Center, and Ellis Island, and is currently working on the refinery component of the Domino Sugar Factory complex. Mr. Bland's other projects include New York's General Theological Seminary, the Shanghai Cultural Plaza in the Luwan District of China, the Muhammad Ali Center in Louisville and an urban design and historic preservation plan for Shanghai's People's Square Historic District.
[watch it now]

Mr. Silman also founded and previously served as chairman for the Working Commission 7 on Sustainable Design for the International Association for Bridge and Structural Engineers (IABSE) and worked with the National Trust for Historic Preservation to co-lead forums on sustainability and historic preservation in Pocantico, NY and Nashville, TN. He has received numerous awards for his accomplishments in engineering, contributions to historic preservation, and mentoring, including the AIA New York Chapter Award, the New York Districts Council's Landmarks Lion Award, and the Anton Tedesco Medal.

Frank Sciame established F. J. Sciame Construction Co., Inc. (Sciame) in 1975 and Sciame Development (SDI) in 1995, and is widely recognized as the builder of choice for high-concept design and technically-challenging projects. Sciame built the Pierpont Morgan Library and Museum, the New Museum of Contemporary Art, the Museum of Arts and Design, The Guggenheim Museum restoration, The Cooper Square Hotel, The Mark Hotel, and the new Academic Building at Cooper Union.

In 2006, Mr. Sciame was appointed by Governor Pataki and Mayor Bloomberg to lead the effort to ensure a buildable World Trade Center Memorial. He was asked to align the budget and the design by working with the families of the victims and many other stakeholders to define a viable project for New York and the Nation. Mr. Sciame has also shown his genuine commitment to New York City and its built environment through his years of civic responsibility and has received numerous awards. He is a Board Member and Past-Chairman of the New York Landmarks Conservancy and the New York Building Congress, and is an Honorary Member of the AIA New York City and New York State chapters. He serves on the Boards of The City College Fund, the Alumni Association and The 21st Century Foundation for The City College of New York. He also serves on the Boards of the Lower Manhattan Cultural Council and the Actors Center. Mr. Sciame holds a Bachelor of Science Degree in Architecture and an Honorary Doctorate of Fine Arts from The City College of New York.
[watch it now]

Since its inception in 1974, CPC has created and preserved almost 100,000 housing units throughout both states. As one of the most highly regarded lending operations in the country, CPC has accomplished vital work in preservation, catalyzed development, and provided innovative solutions for community housing resources in both private and public projects. CPC's involvement in the Domino development demonstrates its commitment to adaptive re-use of historic buildings, aiding quality of life through affordable housing, and support of growing neighborhoods.
[watch it now]