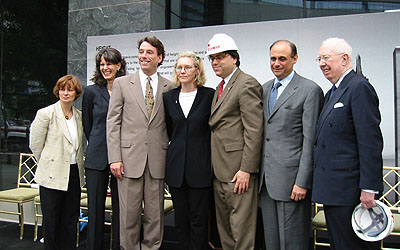 (June 11, 2003, New York) The Skyscraper Museum marked the start of construction today with a kick-off event at 39 Battery Place, where the museum is scheduled to open in late October 2003. This will be the Museum's first permanent home after six years of presenting exhibitions and programs in temporary spaces in New York's historic financial district.

The event was also attended by Joseph Seymour, Executive Director of Port Authority of New York and New Jersey, Robert Tierney, Chairman of the NYC Landmarks Preservation Commission, as well as museum members, colleagues from downtown museums, and members of the press.

Speeches were followed by a hard-hat tour led by Carol Willis and the Museum's architects Roger Duffy and Scott Duncan from Skidmore, Owings & Merrill. The SOM design is a dazzling work of contemporary architecture featuring a permanent gallery for the core exhibit Skyscraper/City, a gallery for changing exhibitions, a bookstore, and a mezzaine for staff offices. The design features polished stainless-steel floors and ceilings that reflect the floor-to-ceiling exhibition cases into endless verticals, generating a sense of towering volumes. A large-scale "light box" by artist James Turrell will form the Museum's entrance. This will be Turrell's first outdoor public artwork in New York, and it will be an icon of light and hope in the redevelopment of Lower Manhattan.

The Skyscraper Museum is grateful to the following companies and firms that have donated, designed, and are building the new home: Millennium Partners, Skidmore, Owings & Merrill, Tishman Construction Corporation, and the Battery Park City Authority. Construction has been made possible with major public support from: The City of New York , the New York City Council, Manhattan Borough President C. Virginia Fields , the Battery Park City Authority, the New York State Council on the Arts, and foundation and private funding. See the Capital Campaign donors form for more information.

The Skyscraper Museum is the first and only museum in the world devoted to the history of skyscrapers and skylines. Located just six blocks south of ground zero, the Skyscraper Museum's new home recognizes the key role -- past and future -- of the downtown skyline in the image and identity of New York City. The new museum facility stands at the nexus of major tourism and cultural activity and is expected to attract around 125,000 visitors annually. The 5,800 s.f. ground floor space at 39 Battery Park Place is located on the ground floor of a mixed-use building occupied by the Ritz-Carlton Hotel and tower condominiums.

Founded in 1996 by architectural historian Carol Willis, The Skyscraper Museum has served its audiences for six years in exhibitions, public programs, and its award-winning website (www.skyscraper.org). The Skyscraper Museum anticipates the completion of its permanent home, scheduled for October 2003. The Museum will open with the exhibit Building a Collection, followed in spring 2004 by Wright's Towers, the first comprehensive exhibition of Frank Lloyd Wright's high-rise designs.

For digital images of the architects' renderings of the Museum design, or for pictures of the kick-off ceremony, click here or contact [email protected] or call 212 / 968-1961.