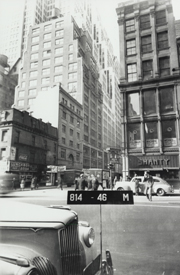 The Ladies' Garment Industry was New York City's largest employer in the first half of the 20th century, and "Seventh Avenue" was the city's most famous industry. While much has been written about the history of the unions and of fashion in general, this lecture and the related URBAN FABRIC exhibition focus on the architecture and development of the Garment District. Curator Andrew Dolkart discusses the character of the high-rise lofts and the forces that led to the creation of one of New York's most distinctive neighborhoods.

Andrew Dolkart is the James Marston Fitch Professor of Historic Preservation at Columbia University's Graduate School of Architecture of Architecture, Planning, and Preservation. He has written extensively about the architecture and development of New York, including the award-winning Morningside Heights: A History of Its Architecture and Development and the Guide to New York City Landmarks. He has curated numerous exhibitions and is well-known for his walking tours of New York City neighborhoods.