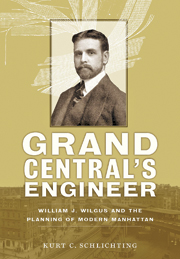 In the centennial year of New York's great Grand Central Terminal, we celebrate the chief engineer of the New York Central Railroad, William J. Wilgus. Few people have had as profound an impact on the history of New York City. Prof. Kurt C. Schlichting will discuss the remarkable career of this innovator, revealing how his tireless work moving people and goods over and under Manhattan Island and its surrounding waterways forever changed New York’s bustling transportation system. After his herculean efforts on behalf of Grand Central, the most complicated construction project in New York’s history, Wilgus turned to solving the city’s transportation quandary: Manhattan—the financial, commercial, and cultural hub of the United States in the twentieth century—was separated from the mainland by two major rivers to the west and east, a deep-water estuary to the south, and the Harlem River to the north. Kurt Schlichting is the E. Gerald Corrigan Endowed Chair in the Humanities and Social Sciences and professor of sociology and anthropology at Fairfield University. He is also the author of Grand Central Terminal: Railroads, Architecture and Engineering in New York.