Vertical: The City from Satellites to Bunkers 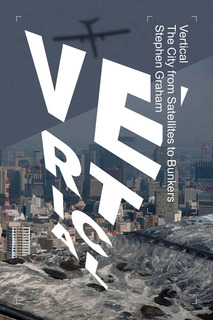 To celebrate the launch of his new book, Vertical: The City from Satellites to Bunkers, The Skyscraper Museum will host a conversation between Professor Graham and writer and architect Keller Easterling about our vertical cities and the geographies of inequality.

Stephen Graham is Professor of Cities and Society at the Global Urban Research Unit, based in Newcastle University’s School of Architecture, Planning and Landscape. He is the author or editor of several books, including Telecommunications and the City, and Splintering Urbanism (both with Simon Marvin), Cities, War and Terrorism, Disrupted Cities: When Infrastructures Fail, and Cities Under Siege: The New Military Urbanism.

Keller Easterling is an award-winning writer, architect and Professor at the Yale School of Architecture. She is the author of Organization Space and Enduring Innocence, which was named Archinect’s Best Book of 2005. Easterling is also the author of two essay-length books: an ebook, The Action Is the Form: Victor Hugo’s TED Talk and a forthcoming book Subtraction. Easterling lectures widely in the US and abroad and contributes to, among others, Domus, Artforum, Grey Room, E-Flux, Cabinet, and Volume.