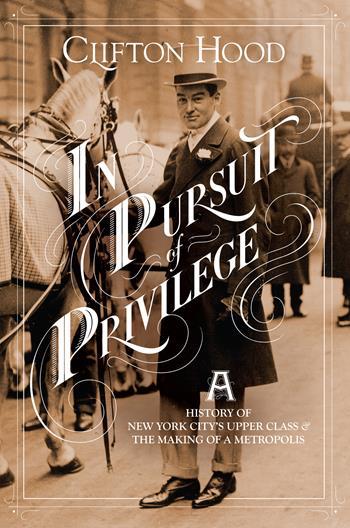 In his new book In Pursuit of Privilege, Clifton Hood recounts how, throughout the city's history, upper-class New Yorkers have struggled to create a distinct world, guarded against outsiders, even as economic growth and democratic opportunity enabled new aspirants to gain entrance. Yet despite their efforts, the privileged class has been drawn into the larger story of the city, both through class conflict and through their role in institution building. Hood limns the famous and infamous characters, from the elite families and wealthy tycoons of the 18th and 19th centuries to Wall Street executives today. Surveying decades of upheaval and change, he shows that New York's upper class did not rise exclusively from the Gilded Age, but from a relentless pursuit of privilege, affecting not just the urban elite, but the city's entire cultural, economic, and political fabric.

Clifton Hood is professor of history at Hobart and William Smith Colleges. A noted urban historian and expert on New York City, he is the author of 722 Miles: The Building of the Subways and How They Transformed New York (1993). His work has appeared in numerous publications, including the Journal of Urban History, Journal of Social History, Reviews in American History, and the New York Times.