Navigate the videos of individual speakers in the Program Schedule below or in the menu at the right.

In conjunction with the current exhibition The Woolworth Building @ 100, on display through September 8, 2013, The Skyscraper Museum presented an afternoon of illustrated talks, inquiry, and dialogue inspired by the centennial of New York City’s great Gothic tower "The Cathedral of Commerce."

Tallest building in the world on its opening in 1913, the Woolworth Building was at once a marvel of early 20th-century technology and a masterpiece of the architectural arts. In an era when New York architecture communicated as much through the abundance of ornament as through ambitious scale, the Woolworth Building represented an artistic creation of the highest order.

The free public program brought together eight accomplished scholars of skyscraper history with the goal of raising new sorts of questions to inform the coming decades of architectural and urban history. Held in the rear lobby arcade of the Woolworth Building, the program was organized in two sessions.

KEVIN MURPHY “In the Nature of Materials”:
Adapting Gothic to American Architecture

DIETRICH NEUMANN Woolworth and the World: A Skyscraper for Mussolini


This program is presented with the generous support of
ELISE JAFFE + JEFFREY BROWN.

Thanks to the Woolworth Building for hosting the program.

Mary Beth Betts is an architectural historian and former Curator of Architecture at the New-York Historical Society, where she compiled the first finding aid to the Cass Gilbert collection.

Gail Fenske, author of The Skyscraper and the City: The Woolworth Building and the Making of Modern New York, is Professor of Architecture in the School of Architecture, Art & Historic Preservation at Roger Williams University.

Joanna Merwood-Salisbury, author of Chicago 1890: The Skyscraper and the Modern City, is Director of Academic Affairs and an Associate Professor in the School of Constructed Environments at Parsons The New School for Design.

Kevin Murphy is Professor and Executive Officer in the Ph.D. Program in Art History at the CUNY Graduate Center and is published articles on topics in European and American architecture and material culture in the Journal of the Society of Architectural Historians, Journal of Urban History, as well as in a number of anthologies.

Suzanne Stephens is a deputy editor and writer for Architectural Record and numerous publications. She is an adjunct professor at Barnard College, teaching the history of architectural criticism. Her dissertation on American architectural writing addressed contemporary responses to the Woolworth Building and the evolution or skyscraper criticism.

Mary N. Woods is Michael A. McCarthy Professor of Architectural Theory at Cornell University; she is the author of From Craft to Profession: The Practice of Architecture in Nineteenth-Century America.

Carol Willis, the founder, director, and curator of The Skyscraper Museum is the author of Form Follows Finance: Skyscrapers and Skylines in New York and Chicago. 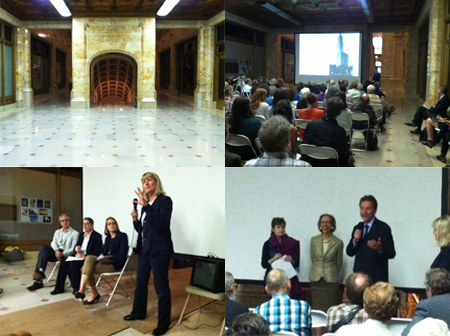 “The Woolworth Building @ 100” opened to the public on February 27, 2013 and will run through September 8, 2013. For more information on the exhibition, click here.

For information on gallery tours of the exhibition and other exhibition-related programming, click here.

For information about membership to the Skyscraper Museum, click here.

The Woolworth Building @ 100 is supported, in part, by public funds from the New York City Department of Cultural Affairs in partnership with the City Council.