In conjunction with the current exhibition TIMES SQUARE, 1984, The Skyscraper Museum presented a series of programs that reunited key actors in the transformation of Times Square over the past three decades. Each evening focused on a set of issues and questions that ask the original authors, including government officials, planners, urban designers, developers, architects, critics, preservationists, and civic activists, what really happened in the Eighties, and how they view Times Square now?

How Today's Times Square Was Encoded in the Eighties


In conjunction with the current exhibition TIMES SQUARE, 1984 The Skyscraper Museum presents a series of programs that bring together key actors in the transformation of Times Square over the past three decades. The first, Times Square Revisited: Urban Planning and Urban Design, examined the role of government, including the actions of the City Planning Commission in the rezoning of West Midtown and the Special Theater Sub-district, and the urban renewal plans overseen by the 42nd Street Development Project of New York State's Urban Development Corporation (UDC). The 42DP conceived a plan for four mega-towers at the corners of Broadway, Seventh Avenue, and 42nd St. that would be the deus ex machina that would create revenue to renovate historic theaters and fund subway improvements.

This program was presented in collaboration with the AIANY's Planning & Urban Design Committee.

Click HERE to watch the hour and a half program. 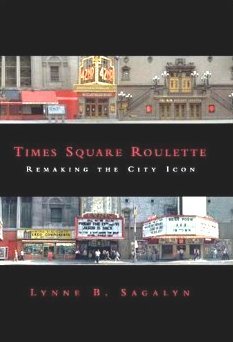 In 2001, Lynne B. Sagalyn published Times Square Roulette (MIT Press), the definitive history of Times Square's redevelopment. Debunking the myth of an overnight urban miracle performed by Disney and Mayor Giuliani, she recounts the far more complex and commanding tale of a twenty-year process of public controversy, nonstop litigation, and interminable delay. On the occasion of the Museum's exhibition TIMES SQUARE, 1984, she describes about the process of researching and writing the book and poses new questions about the Times Square of 2014. Click here to watch the video of illustrated talk.

Lynne B. Sagalyn is the Earle W. Kazis and Benjamin Schore Professor of Real Estate and Director of the MBA Real Estate Program at the Columbia University Graduate School of Business. She is currently finishing a book on the rebuilding of The World Trade Center.

SENSES OF PLACE:
REFLECTIONS ON PRESERVATION IN TIMES SQUARE

Thirty years ago, preservationists acted effectively to protect the physical fabric and the essential character of at least two Times Squares. Were they successful? A panel of key players in the drama of the preservation of Times Square will reflect on the legacy and evolution of today's Times Square.

Click HERE to watch the program SENSES OF PLACE

TIMES SQUARE AT A TIPPING POINT?

Government actions in the 1980s and 90s designed to control rampant crime in Times Square, foster the westward expansion of the midtown office district, protect the theater industry and preserve historic theaters, and return 42nd Street as a popular entertainment area have been a success. The bright lights of Broadway were saved from threats of dimming, or even banishment, first by civic groups such as the Municipal Art Society who organized protests, then by revised zoning regulations that mandated minimum areas of signage and outlined urban design guidelines. Collectively, these civic and government actions succeeded in articulating and codifying Times Square's unique, historical sense of place.

As an economic engine for the city and an unparalleled magnet for tourists, Times Square's turnaround in the past decades is phenomenal. The reduced vehicular traffic and new pedestrian plazas allow almost enough ground space for the 360,000 visitors a day to the world's #1 tourist ticker. But other forces threaten its future: mega-signs; high rents; corporate homogeneity; errant Elmos. This program of experts on Times Square past and present will consider pressing questions about its future.

Click HERE to watch the program TIMES SQUARE AT A TIPPING POINT?