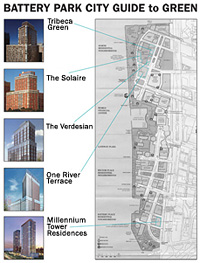 
Begun in the late 1960s with landfill from the excavations of the World Trade Center, Battery Park City was developed according to an evolving series of master plans and built largely in the 1980s and 1990s. Today, its 92 acres have been almost fully built out as a mixed-use community with a north and south residential neighborhood set within landscaped public parks and a commercial core of skyscrapers, the World Financial Center.

In 2000, the Hugh L. Carey Battery Park City Authority (BPCA), the New York State authority that oversees the development and operation of Battery Park City, instituted mandatory green guidelines for all new residential buildings. The first to be erected under these standards for design, construction, and operation was the Solaire in the north neighborhood. Completed in 2003, it was the first green apartment building in the United States and won Gold LEED status and numerous international awards. Just to the west, the second building completed under the guidelines was Tribeca Green, designed by Robert A.M. Stern and Associates for The Related Companies. On a neighboring block is the third building, the Verdesian, built by the same developer and architect as the Solaire, the Albanese Organization and Rafael Pelli of Pelli Clarke Pelli. The last remaining residential site in the north neighborhood, now under construction, is One River Terrace, designed by Polshek and Partners and developed by The Sheldrake Organization.

Next: Mixed-Use and Other Residential