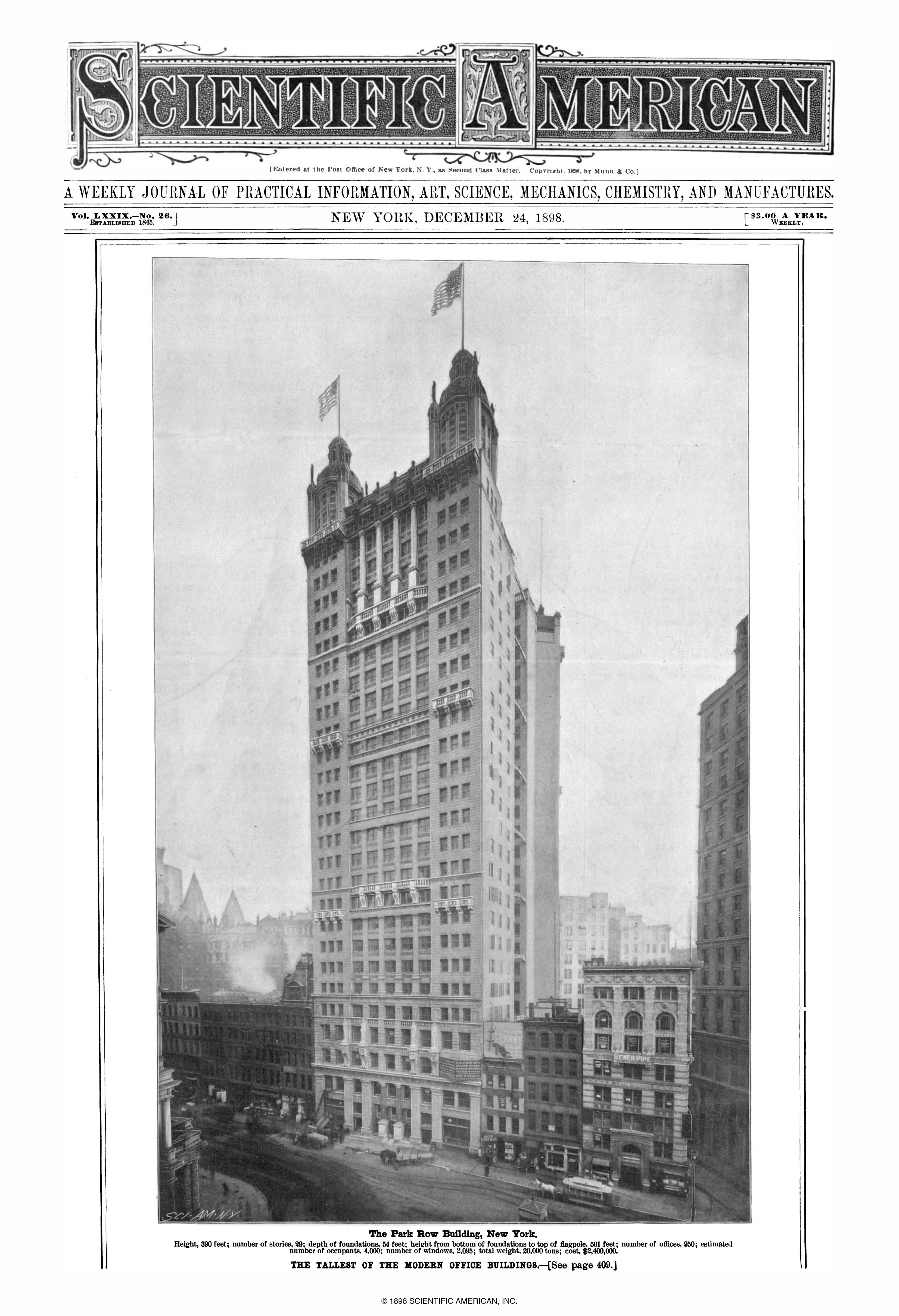 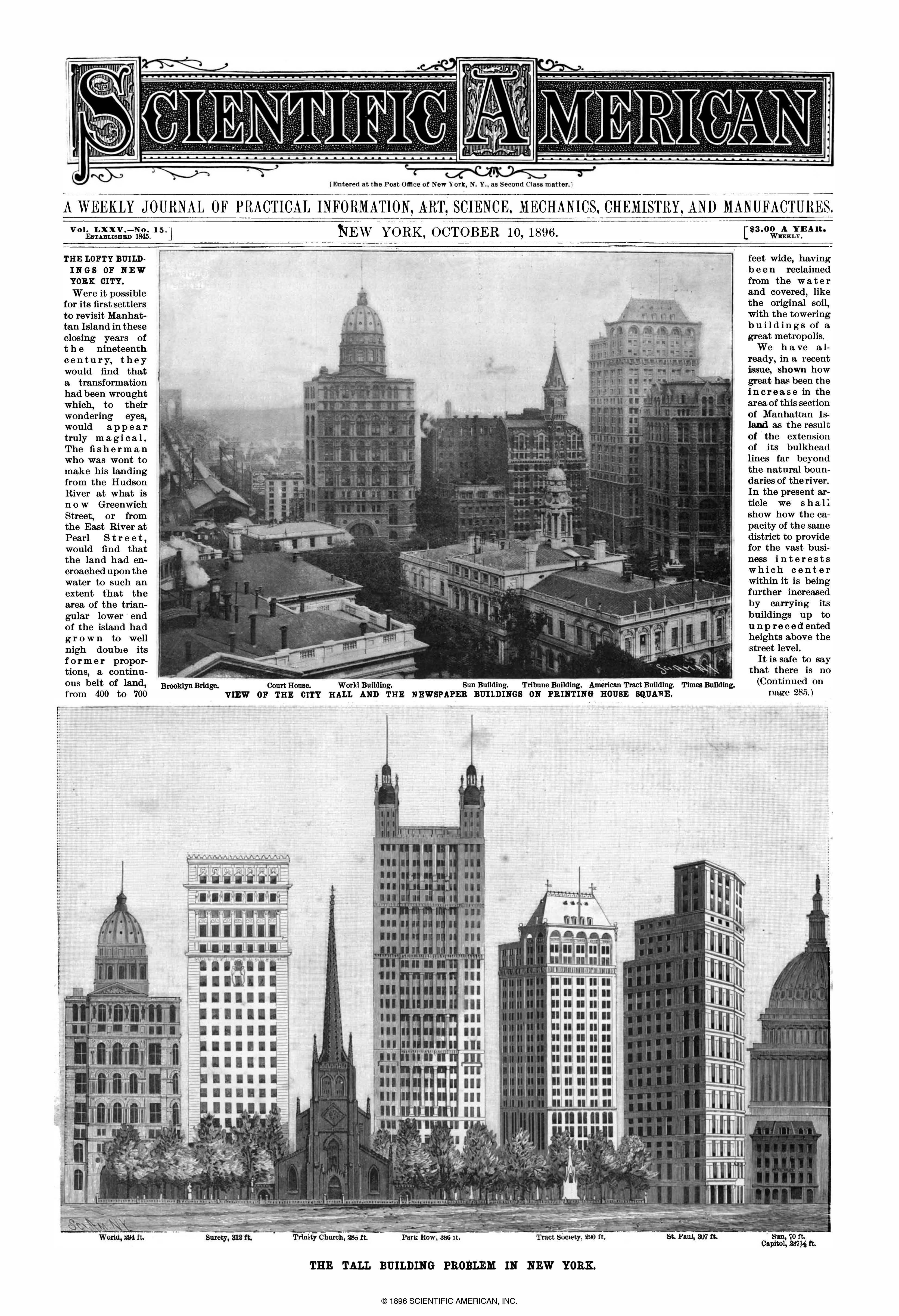 Since 1890, when the dome and cupola of Joseph Pulitzer’s World Building stretched to 309 feet, surpassing the spire of Trinity Church at 270 feet, the tallest buildings in New York City have been office buildings. Remarkably, the 1874 Tribune and Western Union buildings remained the city’s second and third tallest buildings until 1893 when the 348-foot Manhattan Life Insurance Building was completed and a spurt of towers followed that are all pictured here in the collection of the city’s ten tallest towers in 1900.

Why this rise in the height, scale, and volume of construction? Certainly, technological advances – especially steel skeleton construction and improved foundations and other mechanical systems – were a factor. But close study, made possible by the detailed data of Donald Friedman’s study of structural approaches, shows that the adoption of skeleton construction or caisson foundations sunk to bedrock were not universal, but more keyed to the economics of the particular site.

Still, the tallest buildings receive the most press attention. That has been true since the Tribune, Western Union, and Evening Post buildings were promoted and praised by the very newspapers that erected and occupied them. The press – and humans generally – seem to have a natural fascination with bigness, great height, and superlatives: the biggest dinosaur; largest ocean liner; tallest skyscraper.

The question of how to measure vertical height (which today is the specialty of the Council on Tall Buildings and Urban Habitat), and what exactly to count is an issue that extends back to the origins of the skyscraper. The options for the Park Row Building were detailed in the Scientific American:

Counting the foundations as part of the building seems legitimate (especially when one looks at the structural models of the in the exhibition). Basements and cellars are enclosed, usable spaces, just like the stories above ground level, and whether masonry footings or concrete caissons, foundations are a substantial part of the constructed tower.

As the Scientific American noted, though, “it may surprise some of our readers to know” that the foundations of the Park Row Building – the world’s tallest – did not rest on bedrock, but on a bed of sand. The article explained:

“The duty of carrying the building is entrusted to some four thousand 12-inch piles, which were driven into the sand by the pile-driver until they refused to budge any further…. The piles are spaced 16 inches between centers immediately beneath the vertical columns, and the rows of piles will be about 2 feet apart. Moreover, as the piles are cut off below the level of ground water, they are absolutely indestructible.

To insure an even distribution of the pressure, huge "distributing girders" were placed between the foundations and the footings of the vertical columns of the building. These girders are from 8 feet to 47 feet long and vary from 4 feet to 8 1/2 feet in depth. The heaviest of these, which is placed beneath the wall on Theater Alley, weighs 52 ½ tons. While on the subject of the steel work, it will be of interest to state that the heaviest load borne by any one column is 1,450 tons.”

NEXT: Tallest Buildings in 1900