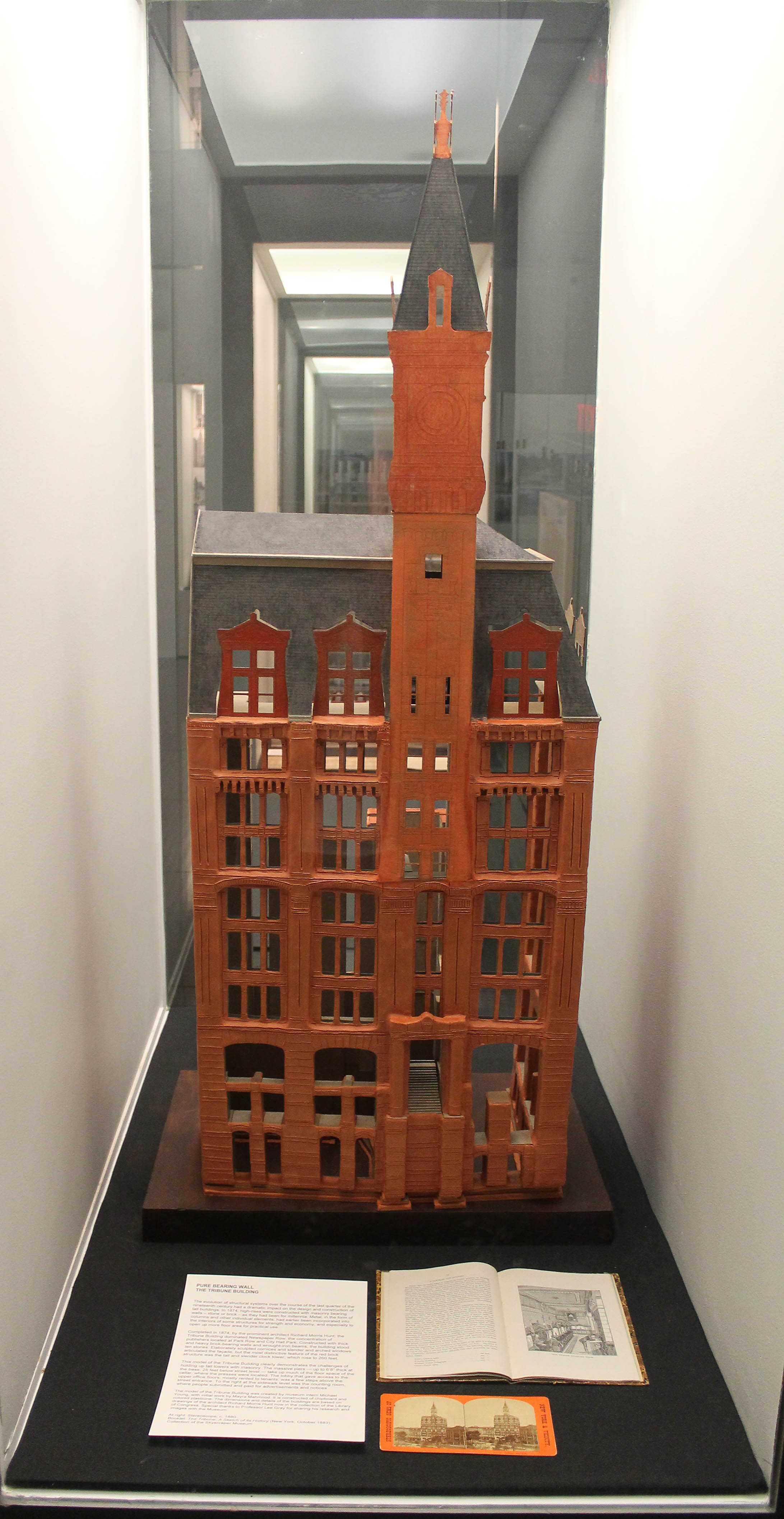 Scale model of the Tribune Building, hand built by The Skyscraper Museum.

The evolution of structural systems over the course of the last quarter of the nineteenth century had a dramatic impact on the design and construction of tall buildings. In 1874, high-rises were constructed with masonry bearing walls – stone or brick – as they had been for millennia. Metal, in the form of columns and other individual elements, had earlier been incorporated into the interiors of some structures for strength and economy, and especially to open up more floor area for practical use.

Completed in 1874, by the prominent architect Richard Morris Hunt, the Tribune Building dominated Newspaper Row, the concentration of publishers located at Park Row and City Hall Park. Constructed with thick and heavy brick-bearing walls and wrought-iron beams, the building stood ten stories. Elaborately sculpted cornices and slender and arched windows articulated the façade, but the most distinctive feature of the red brick structure was the tall and slender clock tower, which rose to 260 feet.

This model of the Tribune Building clearly demonstrates the challenges of holding up tall towers with masonry. The massive piers — up to 6’8” thick at the base, 25 feet below street level — take up much of the floor space of the cellar, where the presses were located. The lobby that gave access to the upper office floors, mostly rented to tenants, was a few steps above the street entrance. To the right at the sidewalk level was the counting room, where people submitted and paid for advertisements and notices.

The model of the Tribune Building was created by museum intern Michael Young, with initial work by Mayra Mahmood. It is constructed of chipboard and colored plasticine. The dimensions and details of the buildings are based on drawings of the architect Richard Morris Hunt now in the collection of the Library of Congress. Special thanks to Professor Lee Gray for sharing his research and images with the Museum. 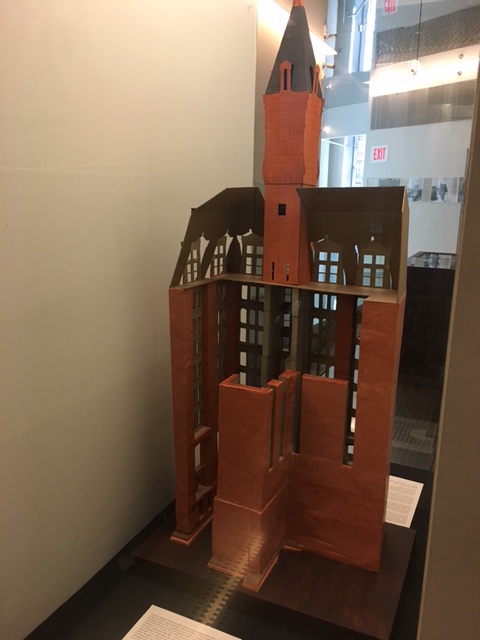 Back side of Tribune Building model.

As the massive masonry walls shown in the model make clear, a major part of the structure was invested in the foundations below grade. The Tribune Building does not sit on bedrock, but on hard “beach red sand” and a 20-inch thick bed of concrete and granite slabs that averaged 7 by 9 feet and weighed up to 10 tons. From the lowest point of the foundation to the tip of the spire measured 285 feet – which arguably seems a better measure of the building’s height than the distance to the highest point above the sidewalk. In an article in the Tribune on the building’s opening day, the paper boasted of the brick and granite structure: “The masonry consequently becomes as firm as solid rock, and grows stronger and stronger with age. Not a brick can be dislodged from any part of the walls, from cellar to roof, except by the slow process of cutting it out.”

The central portion of the structure supporting the clock tower also housed the elevators and staircases. The elevator was powered by a steam engine outside the building and the cab was illuminated by gaslight. Daylight was of utmost importance to the quality of the office space, and the large size of the windows in the model and their expanse make clear both the intention and the difficulty of creating a light-filled interior in a building with masonry walls thick enough to serve as structure. 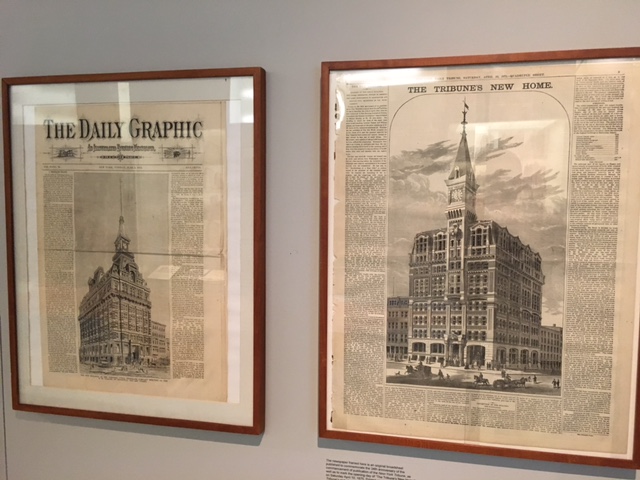 The newspaper framed here is an original broadsheet published to commemorate the 34th anniversary of the commencement of publication of the New-York Tribune, as well as to mark the opening day of “The Tribune's New Home” on Saturday April 10, 1875. Printed on rag paper – as was the Tribune’s and all other newspapers’ practice before the introduction of cheaper acidic wood-pulp paper, which with time turns brown and brittle – the large engraving of the building and accompanying article boasted of the paper’s imposing new headquarters, which was also the tallest office building in the city.

Tribune Building stereoscope showing first stage of construction with only only two of the four planned bays of the Spruce Street façade. Collection of the Skyscraper Museum.

Oddly, the story did not mention that the drawing of Hunt’s original design did not match the structure as built. As can be seen in the stereoscope photograph in the case, the first stage of the Tribune Building’s construction erected only two of the four planned bays of the Spruce Street façade. The two extra bays on Spruce Street and a wing extending to Frankfort Street would not be added until an expansion in 1881.