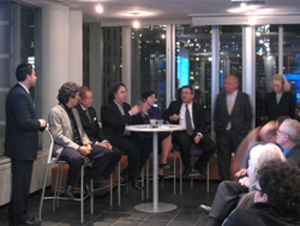 Left: Bush Tower, 1917
Right: Gillender Building, 1897
New York was the birthplace of the improbably slender tower in the late nineteenth and early twentieth century when numerous buildings, such as the 1917 Bush Tower on W. 42nd Street or the 1897 Gillender Building at Wall and Nassau streets, rose as tall shafts over every inch of their very narrow and high-priced lots. "That was before the city imposed zoning laws that restricted, first, building heights and setbacks, then later, a maximum FAR (floor area ratio) formula," explains Skyscraper Museum director Carol Willis. "To erect a very tall building on a small site under today's zoning, a developer must purchase available air rights from adjacent low-rise properties."

The three buildings featured in the evening's program are the most slender towers recently completed, but also part of a renaissance of the type in New York.

Sky House is a 55-story through-block thin slice of a building with a 45-foot faï¿½ade on E. 28th Street, between Fifth and Madison avenues, and only 35 feet on 29th Street. The slenderness ratios for its 588-foot height are therefore 1:13 and 1:17. Similarly, the 42-story spike of 785 Eighth Avenue occupies a wedge-shaped site with narrow frontage of just 23 feet, 8 inches on its narrow side, so has a ratio of 1:18. At 621 feet, One Madison Park, a stack of glass cubes stretching 50 stories, is the tallest of the three buildings, but also relatively fat with a ratio of 1:12. Other tall, thin towers announced, or in the early stages of construction, include 610 Lexington Avenue, as well as 30 Park Place, 50 West Street, and 45 Broad Street, all in lower Manhattan.

Left: One Madison Park
Right: 785 Eighth Avenue
The program also examines the engineering concept of slenderness. Structural engineers consider skyscrapers with a minimum 1:10 or 1:12 ratio-the width of the building's base to its height-to be "slender." (For the layman to visualize a 1:12 ratio, think of a ruler 1-inch wide and set on end.) Slender towers require special measures, and sometimes considerable expense, to counteract the exaggerated forces of wind on the vertical cantilever. These can include additional structure to stiffen the building or various types of dampers to counteract sway.

Highcliff
and The Summit,
Hong Kong

The most slender residential skyscraper in the world is Hong Kong's Highcliff, which rises 72 stories and 828 feet (252 meters) with an extraordinary slenderness ratio of 1:20. Extreme slenderness is characteristic of Hong Kong's tall buildings, and the city has more pencil-thin towers than any place in the world. In particular, in the 1980s, Hong Kong's high land values and liberal zoning laws spawned whole districts of extraordinarily slender and densely-packed apartment towers such as the Mid-levels where hundreds of apartment buildings exploited the permissible FAR of 1:18.


The Skyscraper Museum's current exhibition, "Vertical Cities: Hong Kong | New York" examines the parallels in the vertical identities of the world's two premier skyscraper cities. The Museum hosted an international conference, "Vertical Density | Sustainable Solutions," which expanded on many of the themes of the urban comparisons. Check out the video archive of the conference!