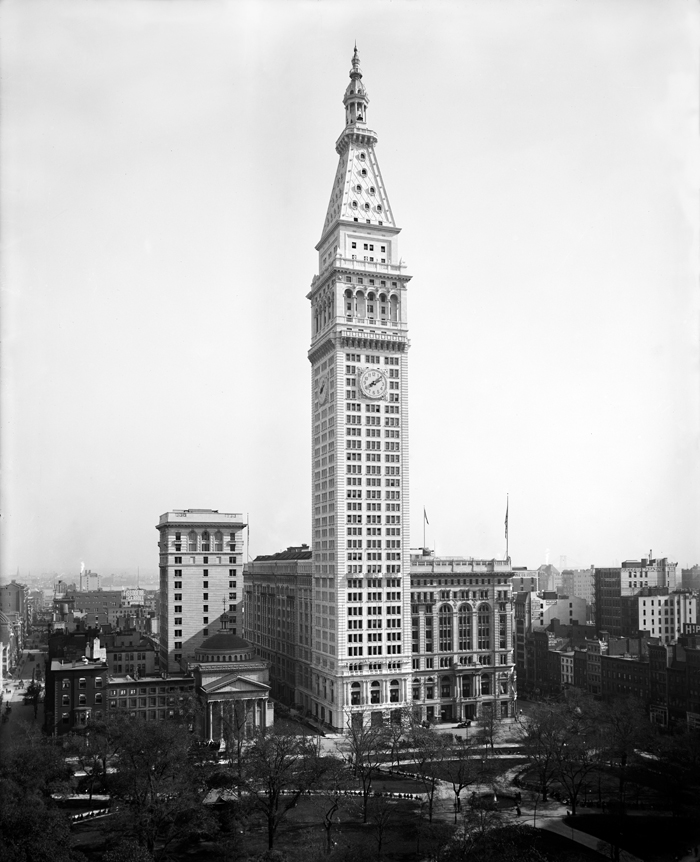 Soaring to 700 feet, the Metropolitan Life Insurance Tower took the title of world's tallest office building from the 612-foot Singer Tower in 1909, soon after the company became the world's largest insurer. Designed by architect Napoleon LeBrun and Sons, the 50-story building took the form of a slender shaft modeled on the Renaissance bell tower of San Marco in Venice.

In the late 1880s, the company sold its building in Lower Manhattan and moved uptown to Madison Square and 23rd Street, where it erected an 11-story headquarters, completed in 1893. The rapid growth of the business required more and more space for burgeoning staff and files, and over next decade, annexes were added until the buildings covered nearly the entire block. After acquiring the last remaining parcel and demolishing the Madison Square Presbyterian Church, the company erected its signature campanile as a symbol of its success.

The decision to construct a tower of 700 feet on a site just 75 by 85 feet may have been an extravagance, but the skyscraper was also an income-generating property. In a report to his board, Vice President Haley Fiske called the structure "a proper investment of the company's funds, that didn't coast it a cent, because the tenants footed the bill."

Faced in expensive Tuckahoe marble, in the 1960s, the tower was subjected to an aggressive remodeling campaign in which most of the classical detail was stripped off, as well as the balconies and a prominent cornice. The marble façade was replaced with sheer limestone panels, so the tower would match the modernized base. Today, the clock faces remain the only memory of the ornate façade.