The first thing one needs to know about development in New York is that every lot in the city is regulated by zoning and has a limit set on its floor area.

In 1961, a new zoning law dramatically reduced the amount of height and bulk that had been allowed by the 1916 zoning law. That hypothetical maximum is illustrated by the photograph on the rear of the case that was created by reformers who argued that the 1916 bulk was too permissive and dense.

The new law's formula of Floor Area Ratio (FAR) allowed the architect and developer to arrange the permissible FAR in any sort of massing, as the diagram in zoning primer displayed here describes. It also allowed for the purchase and transfer of unused FAR, or "air rights," from adjacent properties.

The formula for FAR and the ability to purchase and pile up additional air rights has created an invisible Monopoly game in Manhattan real estate in which developers often work for years to acquire adjacent properties that could be collected into an "as or right" tall tower. 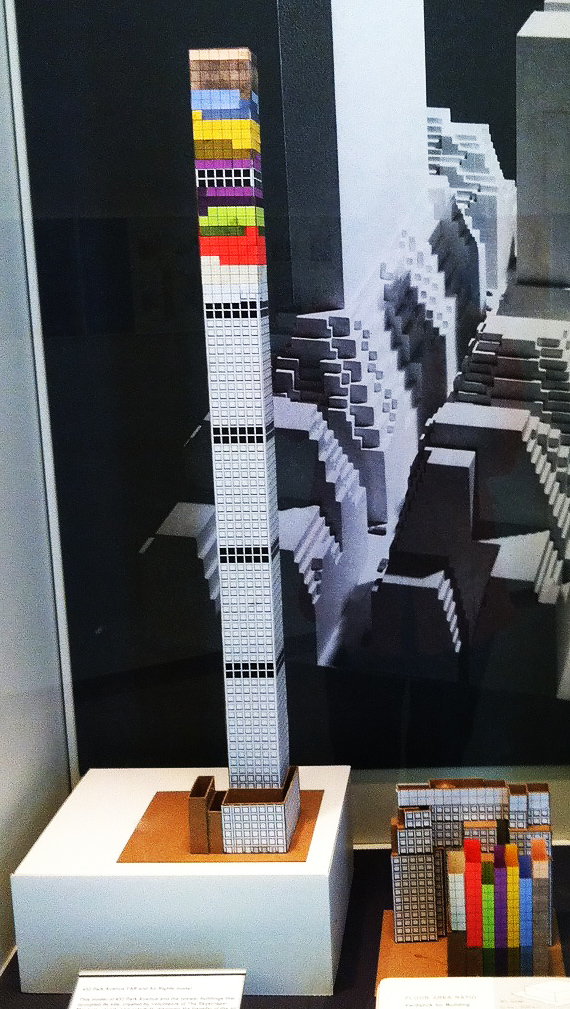 
This model of 432 Park Avenue and the prewar buildings that occupied its site, created by volunteers of The Skyscraper Museum, clearly and colorfully diagrams the transfer of the air rights and the additional FAR of the low-rise buildings on 57th St. that were demolished to make way for the tower. The unused air rights were added to heighten the floor count.

The majority or the FAR assembled in the new tower is reconfigured from the bulk of the former Drake Hotel, represented by the white grid.

Since the full FAR of the surrounding buildings has now been "used up" by the 432 Park Avenue tower, those sites will remain forever low-rise.